The bike’s pilot, Calvin Moes, becomes the fastest person in the world this year – achieving a top speed of just over 127 km/h – and winning the event against about 15 other teams from across the globe.

Composites Canada is proud to be a team sponsor – providing materials, knowledge and advice. 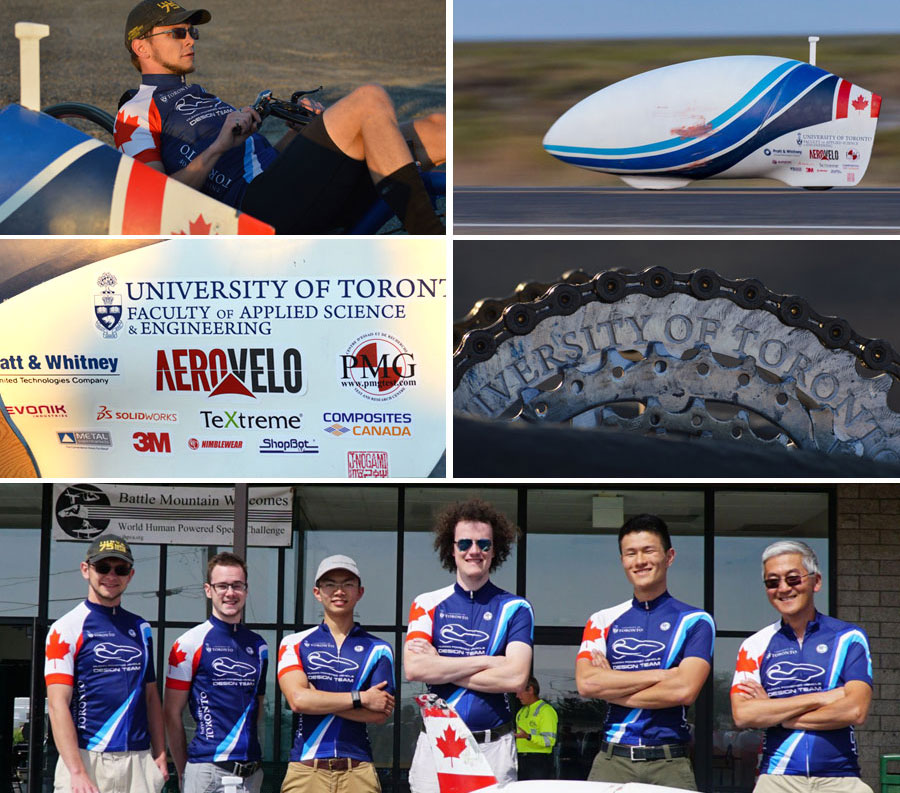 They look like futuristic space pods zooming down the desert road State Route 305 outside of Battle Mountain in Northern Nevada. They’re sophisticated bicycles, designed by teams of engineers, athletes, and aficionados to compete for world records for “human-powered vehicles” on land.  The bikes come in a variety of shapes and sizes, but all will go faster than any traditional bicycle racing along flat ground. Spectators can expect the best teams to be faster and more daring than Tour de France riders during mountain descents.

The team’s recumbent bicycle, named Eta Prime, was clocked at an impressive 127.6 kilometres per hour – the fastest in this year’s competition. Eta Prime’s design is modelled on Eta, the vehicle that currently holds the record for the world’s fastest bicycle at 144.17 km/h. Eta was built by AeroVelo, a company founded by U of T Engineering alumni Todd Reichert and Cameron Robertson.  They used Eta’s molds to cast Eta Prime’s carbon-fibre shell.  “Within a millimetre or two, it has exactly the same shape,” said Moes. “As far as we know, it is the best shape for a single-person speedbike in the world.”

They did improve on Eta’s design by overhauling the carbon-fibre frame that holds up the vehicle and redesigned both the rear wheel and braking system. Through a combination of innovations, they were able to create a bike that was 20 per cent lighter than Eta, while maintaining its internal strength. But as with any speed bike, much depends on the engine – that is, the rider. “You can build the best bike in the world, but if you can’t produce the energy to get it up to speed, you’re not going to get there,” said Moes.

“The fact that we reach the same speeds as the other teams, and in some cases, even surpass them, on significantly less power than their riders can produce is remarkable,” said Moes. “It speaks to the amount of engineering that went into this design.”

Congratulations University of Toronto team and Calvin Moes.  We’re proud to be on your team!

Read more about their win in the University of Toronto News and in the San Franciso Chronicle.
Learn more about the World Human Powered Speed Challenge.